In Como there is a high number of Medieval ruins but they have often been rearranged and have undergone significant changes throughout the centuries. For convenience sake our visit to the Medieval ruins can start from the remains of the Baradello Castle, overlooking the city and located on the hill (with the same name) at south-west of Como. The castle can be reached by car, from Piazza San Rocco, along Via Rimoldi and then Via Castel Baradello. The last uphill stretch can only be covered by foot, along a well-worn path. 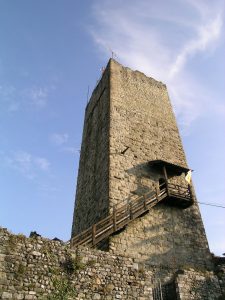 The Castle, a fortified fortress with a well-preserved, 35 mts. high quadrangular tower whose can be visited inside, was erected in 1.158, by emperor Frederick Barbarossa, to guard the city and protect it from attacks by the Milanesi, launched from the Brianza plain. Baradello Castle was then reinforced by the Visconti’s, in the 14th century, and demolished by the Spanish, in the 16th century. It was probably enclosed by walls and linked to the defensive system which gave the name to the locality beneath Cà Merlata. The Castle is historically linked to the tragic death of Napo Torriani, who, defeated by Ottone Visconti, was put into a cage and left there, together with his relatives far nearly two years until they died.

After having viewed the city, we descend along Via Brenta to the Basilica of San Carpoforo (dated 1.025, largely restored). The apse and the bell tower date from the 7th century. This Church is cha­racterized by a

nave and two aisles, raised crypt and pres­bitery. Partially incorporated into a nunnery, it has only side-entrances and is the ol­dest example of Romanesque art in Como. It was the city’s first cathedral. According to tradition – which provides the very same explanation for alI early Christian churches – the Basilica of San Carpoforo was built on the site of a heathen temple dedicated to Mercury. Its style, notwithstanding so­me doubtful restorations, is early Romanesque influenced by Saxon age as it can be revealed by the former double transept. The Basilica is old

er than Sant’Abbondio and San Fedele churches. We conti­nue on our way to Via Regina where we will see the most famous Romanesque Church in Como, the imposing Basilica of Sant’Abbondio (1.095), which was the city’s second Cathedral. It features a nave, four aisles and two bell towers. The remains of S. Felix, first bishop of Como, are buried here. 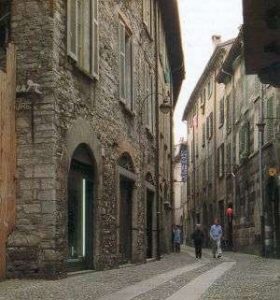 Its second bishop, St. Abbondio, was buried in the Church of Saints Peter and Paul, which originally stood here and was eventually destroyed. The Basilica has an adjoining Benedectine monastery, now abandoned (the State Archives will be transferred here and a diocesan museum is likely to be set up). Inside, on the apse, there are remarkable frescoes dating from the 4th century and featuring episodes in Christ’s life.

Walking down towards the centre of the city opposite the first lake basin, (the Medieval harbour was located where Piazza Cavour stands today and the Roman harbour was not far).
You will see the ruins of the Medieval walls (12th century), which surround the city on three sides. The remaining cicle of walls, erected during the reign of Barbarossa, who also had the previous walls strengthened, during the ten year war with Milan, is characterized by three towers located in the almost entirely preserved southem front: Porta Vittoria, the central, square tower, 40 mts. high, and two lateral towers, San Vitale to the east and Porta Nuova to the west. In ancient times, it was possible to enter the city through Porta Vittoria, after having crossed a drawbridge over the most surrounding the walls. Como was most likely flanked by four additional towers. Inside the city, other evocative Medieval buildings have recent1y been restored: the nineteenth­century plaster, covering the original keystones and framing the typical portals with black and white decorations, has been chipped; the façades of the medieval houses thus discovered create an intriguing atmosphere. These houses are located at Via Serafino Balestra, Via Vittani and Via Muralto – Piazza Mazzini.
It is not enough just to view these houses from the outside, to simply find out when they were built. The particular fascination of Como and of other Italian historical cities in general, lies in the discovery of the most secret and hidden places. Therefore, to fully appreciate these Medieval houses, we have to take a look inside their courtyards – modelled after the “open” four-sided Roman houses and used as portico and garden. Thus we recommend a visit to Via Volta where, past the main entrance of buildings with anonymous Neoclassic façades, you will discover courtyards, columns and friezes whose Medieval splendour has been preserved through the centuries. At Via Volta you will also see the Odescalchi Palace (13th century). It has recently been restored and a modern wing, housing the Municipal library, has been added. 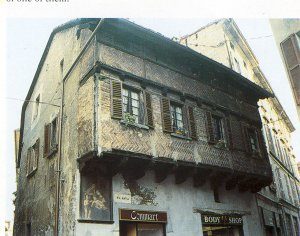 From Via Volta you turn into Via Natta and arrive to Piazza San Fedele, surrounded by late Medieval houses (l6th century), built on wooden, according to a herring-bone pattem. In the courtyard of one of them, you will see the dome of the destroyed Baptistry of San Giovanni in Atrio (5th and 6th centuries). This baptistry had a polygonal plan and was probably modified at the lime of the construction of the Basilica of San Fedele, located on the apposite side of the square which used to be a grain market. San Fedele was built in the 12th century, on the site of the early Christian Church of Santa Eufemia, most likely on the ruins of a pre-existing Roman temple dedicated to Jupiter. Often restored and modified, it features a trefoil plan and 13th and 14th century frescoes. Its most remarkable feature is a polygonal apse, the outer part of which shows an harmonious pattem, created by pilaster strips; on the left transept there is a noteworthy spired portal with jambs, embellished by early Lombard-Romanesque sculptures.
We continue our walk through the Middle Ages and move now to the apposite side of Corno, namely Via Torno, where the Church of Sant’Agostino is located. This Church (14th century) is the only example of an ogival cistercian Church in Como. Its interior features a nave, two aisles and fragments of 14th and 15th centuries frescoes. On our way, back to the centre of the city, we pass Piazza Verdi, where there is a medieval tower dedicated to the condottiero Pantero Pantera and joined with one building. Next to the Cathedral there is the Broletto.Its right wing had a staircase leading to the main entrance and was demolished to make room to the Cathedral that was being enlarged. Erected in 1.215, it originally was the headquarters of the local council, in the 18th century. In the Broletto was used as a theatre. It is flanked by the Civic Tower, made of rusticated stone. In the 15th century this building was bumt down during the scramble for power between the noble families. Subsequent1y it was rebuilt with the addition of a balcony overlooking Piazza Duomo. 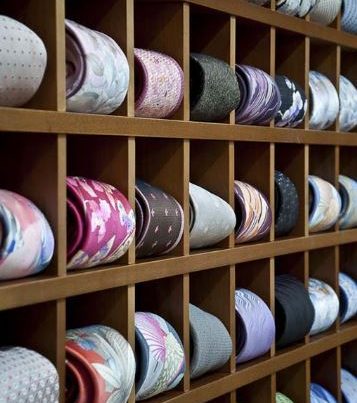