This little village, which lies on the western shore of Lake Como, at the foot of Monte Costone, is one of the most distinctive places on the lake. In the last century Sala Comacina was already considered an important holiday destination, as is demontrated by the many villas which have stood along the coast since then. On the headland known as the “Puncia”, which was formed by deposits from the Premonte stream, stands Villa Rachele. 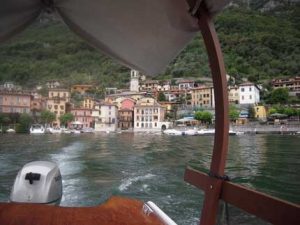 It was owned by Cesare Beccaria and hosted many famous literary figures, such as Alessandro Manzoni and Cesare Cantù. The lake’s only island, Isola Comacina, lies opposite the village and can be reached by boat.
There one can visit the fourteenth century Church of San Giovanni and the remains of the little Church of Sant’Eufemia, which dates back to seventh century but it was rebuilt in the eleventh century.

Every year in June the festival of Saint John takes place to commemorate the destruction of the island by the Comaschi, in 1169, as a punishment for its alliance with Milan, during the ten-year war (1118-1127).

SIGHTS
The Church of S. Bartolomeo
This Romanesque church was rebuilt in the seventeent/eighteenth centuries, but some of the original structure has been preserved. The church contains some paintings from the Luinesca School, a baroque altar made of wood and fresco by the Carloni (17th-18th centuries).