History : from empire to feudal age

History : from empire to feudal age
The Empire Under Augustus, Como, or more exactly Novum Comum, reached its peak.
Being the capital of the XI Regio Transpadana it had become a military and above all a trade connection with Switzerland.
The Splugen, Julier, Septimier and Maloja passes were opened. Through them the Danube and Rhine valleys could be reached in a short time. Because of its geographic location, Como became quite an affluent town. Its importance is clearly indicated by the presence of some thermae, even outside the city walls (Viale Lecco). 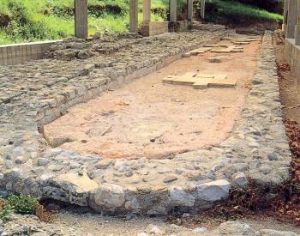 Cobbled paving unearthed with the remains of a Roman Villa at Via Zezio – Como – Lake of Como
The very fact that Como was the native town of two famous writers, Pliny the Elder and Pliny the Younger, stresses its cultural vitality. In addition the city enjoyed a very good relationship with Rome, which celebrated these two writers as they deserved. Pliny the Elder, author of the “Naturalis Historia”, an encyclopedia of ancient learning, was a scientist who decided to follow his true nature and dedicated his entire life to learning. Moreover, he did a lot to help those who survived the Vesuvius eruption in 79 A.D. Pliny the Younger, an advisor and favourite of Traianus, left a collection of letters expressing his love for his native town. Probably the villa discovered in 1975 in Via Zezio – at the corner of Via Tommaso Grossi – is the same one he mentioned in a letter to his friend Cornelius Rufus. In Como, on the Cathedral’s facade, there are two statues of the Plinis by Rodari. After the invasions of the Alemannic people, which destroyed partly of the defences of Como, the town was submitted to the victualling-Italy, whose capital was Milan. Como underwent civil and religious wars.
Anyway during the middle and late Empire, apparently Como did not feel the forthcoming decline: its Lake became increasingly important, to such an extent that a “Praefectus Classis” – the highest military rank in Roman times – was appointed for its flotilla.
Under Dioclezianus however, its walls were restored and octagonal towers built, probably because of the first barbarian invasions (ruins of the ancient walls are still visible in the underground passage of Porta Torre and in the courtyard of an adjacent school).
The Early Middle Ages
In Como as elsewhere, the history of the early Middle Ages was characterized by the emergence of Christianity and by the recurrent threat of barbarian raids. On November 1st, 389, St. Ambrose, archbishop of Milan, appointed Felix bishop of Como. This was the first step toward a steady vangelization, which during the previous years had led to the martyrdom of St. Fedele and St. Carpoforo. Historically, we know more about the life of St. Abondio (5th century). Bishop and patron saint of Como, he is credited with having strengthened the faith and removed all traces of heathenism. Pope Leon I entrusted him with a delicate diplomatic mission to the Emperor of Costantinople. The Saint’s relics are preserved in the Basilica named after him. All these events took place during the invasion of the Huns, led by Attila, and of the Goths.
14th century fresco portraying the stories od Saints Liberata and Faustina – Como – Lake of Como
Both the Huns and the Goths were fully aware of Como’s strategic importance and economic power and thus collected heavy taxes to meet the challenge of possible new invasions.
The Goths were defeated by the Longobards, whose presence was particularly strong in Lombardy. Their Christian Queen Theodelinda contributed to the evangelization of the territory of Como and to the development of a communication system, in that she had “Via Regina” – a route linking Como to Colico – opened up. When Charlemagne got to Italy with his troops, in 774, Como surrendered to its conquerors pacifically, continuing its economic recovery. In fact Como became the seat of markets and fairs thanks to its craftsmen and traders.
The Feudal Age
Soon after the Longobards’ defeats by Charlemagne in Susa (773) and Pavia (774), the whole of northern Lombardy and Como fell under Frankish rule. According to the historian Liutprand, who considered Como “a very rich city” because of its numerous fairs and markets, this transition was painless. The local Church benefited greatly from
the new situation. The Emperor granted estates and tax exemption to bishops and abbots. In addition, the bishop’s authority stretched beyond the city. When Charlemagne’s last descendant died (888), an era of conflicts erupted and it ended only with the arrival of the Othos, whose interests were firmly safeguarded by the energetic and powerful bishop Waldon. One of his good deeds was to have the remains of the martyr, St. Fedele, transferred from Samolaco to Como, to the Church of Santa Eufemia.