In the 18th century, the distinct austerity of neoclassicism succeeded the fine volutes of the Baroque and, once again, drew the attention to the ancient origins of the city. However it displayed a new elegance, based on accuracy, order and clarity. 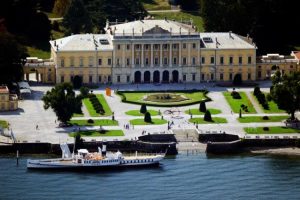 We will start our walk through the 18th century from Simone Cantoni’s masterpiece, Villa Olmo (1.782-92), located at the end of Via Borgovico and surrounded by a huge garden. Innocenza Odescalchi had it built on a spot where a century-old elm grew and, apparently, where one of Pliny the Jounger’s magnificent mansions once stood.
It was, subsequently, passed on to the Raimondi noble family and, then, to the Visconti, who eventually donated it to the Como municipality in 1.924. Villa Olmo features a central part, framed with columns and jutting out on the wings, a lower portico, two rows of windows, huge pilaster strips and, on the top, a trabeation with statues and with the Visconti’s coat of arms. Its interior boasts a vast hall with a wrought-iron balustraded balcony, statues and reliefs by Carabelli and frescoes by Domenico Pozzi. The side-halls on the ground floor are finely decorated with historical scenes: the Mirror hall, the Wedding hall, the Square hall, Diana’s hall, Garibaldi’s room (so called in memory of the unlucky encounter between General Garibaldi and the daughter of Marquis Raimondi), Bacchus’ hall, the hall of Music, containing statues and frescoes by the Pozzi, the Odescalchi Chapel , with an elliptic dome and, finally, the lovely miniature theatre, decorated with frescoes by Fontana.
On the first floor there are other rooms which can be reached through a grand staircase. The most remarkable of them is the Visconti Hall, which stands out because of its numerous decorations.

On the first floor there are other rooms which can be reached through a grand staircase. The most remarkable of them is the Visconti Hall, which stands out because of its numerous decorations. On the way back to the centre of the city, along the lakeside, you will see the row of extraordinary mansions including the seventeenth century Gallio’s villas: Villa Saporiti, attributed to Pollack and featuring a marvellous central hall, decorated with elliptic stucco-works, which the villa takes its nickname from – la Rotonda – that is the Round one. This building has a three-storey concave facade with semi-columns, supporting a tympanum, and a back, decorated with statues and apses. Today it is the headquarters of the provincial government.

Other outstanding villas, located along the lakeside, are Villa Salazar, designed by Felice Soave, and Villa Resta-Parravicino.