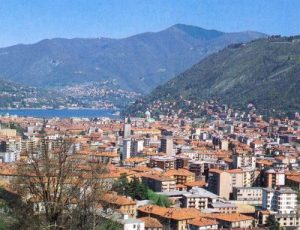 That situation changed dramatically in the 20th century, when a group of artists headed by Giuseppe Terragni conceived the idea to build avant-guarde structures inside the city, without eliminating the traces of an ancient and noble past, but rather developing it by meeting the requirements of a new age (however, the demolition of the Cortesella area, previously a blind alley near Piazza Cavour, which was ordered by the Fascists, destroyed some precious Medieval ruins, like one of the Rusca’s towers, and perhaps some Roman traces).
The “rationalist city”, that ideally was supposed to be as simple and functional as possible and aesthetically valuable, was realized only in a few isolated but valuable instances. Let’s dwell for a moment on the works of the world-famous Giuseppe Terragni, the most important rationalist architect in Corno.

We will start from the centre of the city, namely from Piazza del Popolo, where the “Casa del Fascio” is located. This building was erected in 1.936 and looks like a white box with rows of holes, a “glass house”. It houses offices, conference rooms and a war memorial. The light enters this building in streams and symbolizes the search for truth and transparence.

Another important work by Terragni, the Sant’Elia nursery school located in Via Alciato , is also inspired by the principle of creating a space full of light and a perfect harmony among ali its elements, play grounds, windows, pillars, cantilever roofs.

Terragni’s Buildings, in Como, are for the most part located at the lakeside, near the public gardens where there is also the stadium. One of them is the Novocomum building (1.927-1.929), the first example of rationalist architecture in Italy. It has five floors and a penthouse, totalling 200 rooms arranged in a very harmonious way.

A hundred meters from here you will see the War Memorial (1.933), featuring a 33 mts. high coupled tower of karstic stalle and an inner memorial chapel. This Monument, which is characterized by rounded corners, is the nineteenth century version of a tower-lighthouse, designed, in 1.914, by the futuristic architect Antonio Sant’Elia.
The town council asked Terragni to draw inspiration from that project. In the area, between the War Memorial and Novocomum, there is the Giuliani-Frigerio building, Terragni’s last work, featuring distinctive façades. 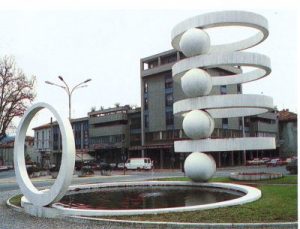 The whole area, destined to sports and leisure, is also characterized by other remarkable structures. As a matter of fact, the efforts of rationalist designers focused on this area, where they fulfilled their goal of giving this piece an harmonious look. The Sinigallia Stadium was built in 1927 in keeping with that ideaI. It was designed by Gianni Mantero, an engineer from Como, and replaced sports facilities built a few years earlier by the Milanese Greppi. Mantero also designed the “Canottieri Lario” (the local rowing club), across the street from the stadium. Stadium, Canottieri Lario and Sailirig Club, War Memorial, hangar, Flying Club building (both on the west side of the stadium) and condominiums create an harmonically structured setting. This harmony was broken only by dwellings built after the Second World War.
However, it is advisable to discriminate between the structures built in the Thirties and the others. The unfinished “rationalist city” left only some indications of what was supposed to be a wider-ranging and more complex design.

Thus, the fountain in Camerlata, designed in 1.935, by Cesare Cattaneo and Marco Radice, characterized by the severe rhythm of its snow-white arches with inserted spheres but built only in 1960 as a posthumous memory, symbolizes an architectural ideal which expe­rienced only a preliminary stage of development. To have a complete view of that period, we should combine the rationalist works with those of ecclecticism which was contemporary to rationalism but clashing with it and which preferred the aggregation of styles of the past to innovation.

A representative of this movement was Federico Frigerio, an architect very interested in ancient times and a conscientious professional. He designed the Tempio Voltiano (Volta Tempie) – located next to the War Memorial and exhibiting the works of this world-famous scientist – and not far from the Cathedral the polycromatic headquarters of the Banca Commerciale.

Finally, Frigerio made the “innovative” restoration of the Bishop’s Palace (1931), through which the original early Middle Age structure was unearthed.