Ossuccio
The pre-Roman origins of this village are confirmed by votive altar from the second century A.D. that belonged to some people called the “Ausuciates”, who gave the village their name. In the area, there was a reflourishing of churches, such as the Romanesque Church of San Giacomo in spurano or that of Santa Maria Maddalena in the hamlet of Ospedaletto. At the foot of the mountain, which rises above the village, there is the Santuario of Beata Vergine del Soccorso (Sanctuary of the Blessed Virgin of Rescue).
Further up, we find the Monastero di San Benedetto with its beautiful cloister. Another important church was that of Sant’Eufemia, which was one of the six churches on the Isola Comacina.

The Bell Tower of Ossuccio (Ospedaletto)
The famous bell tower of the Church of Santa Maria Maddalena in Ospedaletto is well worth a visit. An ornate belfry, made with bricks, was built on top of the existing Romanesque stone belfry. The top of the old bell tower was above the present mullioned window.

Santuario della Vergine del Soccorso
Situated above Ossuccio, this church (16th century, but which underwent changes until the 18th century) contains a venerated statue of the Virgin Mary. It gives access to an avenue with 14 chapels from the seventeenth century, each of which holds a statue that represent the Mysteries of the Rosary. 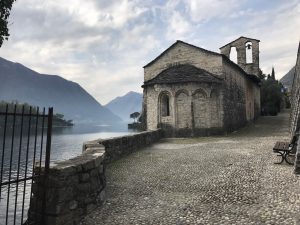 Located in Ossuccio, this single-apsed Romanesque church (11th-12th century), which was restored by the architect Pietro Lingeri, holds some of the oldest frescoes in the area (from the 12th to 15th centuries).

Castel d’IsolaThe old island, in the middle of the lake, can be reached by the ferry service. It is the site of an inn that was famous for its old owner, colled Cotoletta. The island was already inhabited in ancient times. A number of wars took place here, in the early Middle Ages. It was the last refuge for Berengario II and, in 1169, it was the centre of the fighting between the Comaschi and the Milanesi, who razed it to the ground. According to a legend some of its inhabitants migrated to Varenna and most of them went on to the new island, where the Church of Sant’Eufemia was rebuilt, with the same patron as that which was destroyed on the old island.