Dervio lies on a Derviese peninsula that juts out into the waters of the lake, it is situated at the mouth of Valvarrone and plowed of the river Varrone. Very ancient origins it was an important fortified village since Roman times for its strategic position on the road connecting the Valtellina to Milan through Valsassina.
Thanks to its natural beauty and artistic, too, and to the recent infrastructure projects, Dervio is one of the most important tourist location of the eastern shore of Lake Como and it is considered the “Paradiso della vela” – Paradise of the sail – with its ideal location extending into the lake always ventilated and with the four sailing schools. The walk along the lake of considerable extention, with many beaches and with the beautiful location facilities in the countryside, offers an elegant and natural landscape, where walking becomes relaxation and funny. The mountains surrounding Dervio allow excursions in an uncontaminated area with wonderful view. It is a very active country, with several events and initiatives for the entertainment of residents and tourists. 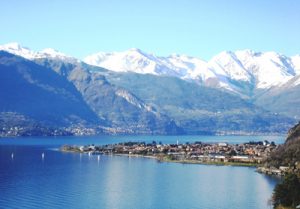 At the foot of the mountain lies the church of San Quirico and Giulitta, one of the oldest religious buildings in the area, mentioned in documents of 814, with stone bell tower in Romanesque style built around 1080. In the area of – Borgo – Hamlet -, overlooking the lake, stands the church of SS. Pietro and Paolo (XI century), with its Romanesque bell tower. Encamped on a cliff overlooking the village, the – Castello di Orezia – “Castle Orezia” was built in the late Middle Ages, to seal off the street of Valvarrone, currently remains a well preserved tower, flanked by the remains of ancient houses. The first mention dates back to 1039, when it suffered a long siege by the armies of the three – Pievi Lariane -. In a location called Mai, 400 meters above sea level, on the promontory overlooking the southern part of Dervio, there are the ruins of Castelvedro V-VI cent. The fort stands in a dominant position and from the remains of walls you can imagine how significant was the size of the castle. It was part of the defense system created on the shores of the lake due to the incursions of barbarians from the Rezia. It was used to control the ancient road on the left side of Valvarrone, which connected Dervio with Piazzo of Casargo at the entrance of Valsassina.

The village of Corenno Plinio is one of the most beautiful places on Lake Como, a place where you can still feel a strong suggestion and imagine the historic events of the lake during the Middle Ages. The medieval hamlet is built around the castle and the church located on the top of the headland. The ancient houses, the special uniform with the arcades and decorations make Corenno an unique and unrepeatable location. It is coming from the lake that you enjoy the most impressive view, with the ancient patrician villas overlooking the cliff and the steep “racks” that climb, with the characteristic steps carved into the rock to the cobbled square.

Even if its history is much older, the fate of Corenno is linked to the family of Counts Andreani, feudal lords from 1271 of the Archbishop of Milan Ottone Visconti. In 1863 he added to his name the name of “Plinio” in honor of the Roman Consul Caio Plinio Cecilio Secondo. Elevated in the X century on the ruins of an ancient fortress, stands the – Castello di Corenno -Castle Corenno – which destination was not to home, but of fortitude – fence that had to endure numerous attacks especially in the XIV century, when Corenno was burned and destroyed in the towards the lake. The fort, once an outpost of Visconti, lords of Milan, is now owned by the family Marietti, successors of Andreani. With well-preserved walls to quadrilateral, a tower of entry such as – a vela – Sailing – facing the square and a square tower built in the following period the upstream side, allowed the control of the old – Sentiero del Viandante – Trail of the Wanderer.

On the square behind the castle there is the church of St. Tommaso of Canterbury, XII consecrated in 1327, it was ordered Parish in 1566 by the Archbishop of Milan, Carlo Borromeo. Inside there are remnants of ancient frescoes dating back to the Lombard school XIV – XVI century. On the front, flanking the entrance, there are the monuments tombs of Counts Andreani, lords of Corenno. Works XIII – XIV century assigned to the masters Campionesi, are rich in sculptural elements of particular interest.