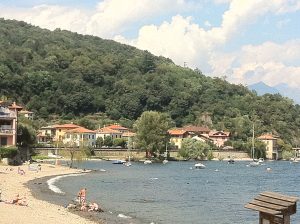 ﻿Finds dating back to Roman times, which include a memorial stone dedicated to the god Neptune, indicate the ancient origins of S. Maria Rezzonico.
It is formed of many little clusters of dwellings; which are scattered around the foot of Monte Bregagno.
Pope Clement XIII is commemorated as Papa Rezzonico because he was a descendant of the Venetians Della Torre di Rezzonico.
The family name of Gallio is also commemorated by a district which is dedicated to him. In Medieval times the village was part of the feud of Menaggio.

SIGHTS:
The church of Santa Maria Assunta
This church, which was built in the fourteenth century; has only one nave; a Renaissance portal in marble from Musso that is from the school of the Rodari; and an ornate facade with Gothic arches.
It contains paintings by Michelangelo Carminati and Sigismondo De Magistris and the painting ‘La Battaglia di Lepanto’ from the fifteenth century.
The main altarpiece is by Giovanni Pietro Gnocchi.﻿﻿