THE SANCTUARY OF THE VIRGIN IN ST.MARTINO

The Sanctuary of Our Lady of the Graces on Mount San Martino stands at 475 mt a.s.l., and from this natural balcony you can enjoy a view over the three branches of the lake.
The small church was in existence since the end of the 16th century with the name “San Martino al Monte”, but around the middle of the 17th century it received the actual name and title.
It was then that a young shepherdess, instead of water, casually found the Madonna statue inside a cavern now known as “Madonna Hole”; the wooden statue, finely gilded and painted maybe remounting to the late 15th century, was brought down to the village but prodigiously showed up again in the mountain: other sanctuaries have a similar origin, such as the Madonna del Soccorso at Ossuccio.
One century before, the area was ravaged by soldiers and mercenaries from Reformed countries, so many holy images are supposed to have been put into hiding-places in order to avoid profanation; their subsequent findings used to lead to the foundation of sanctuaries dedicated to the Virgin Mary, “fortress” against heresy.

During restoration works in the parishioner’s house in the Thirties the masons found some Byzantine golden coins; the fact testifies that the site was a watch point for the Roman Empire against the barbarians.
Restored in the Seventies by the villagers with their work and offerings, the small church was repeatedly robbed, but its beauty consists in its clean design and rustic material, as well as in its invaluable situation.

It is open in the week ends from May till October on demand, but Holy Mass is also celebrated on May 1st and November 11th (St. Martin’s festivity).

Mid-way from Griante there is the old San Carlo chapel, restored in 1977 as a shrine in memory of all dead soldiers; two paintings by Bruno Azimonti (recently restored by his daughter Daniela) are in honour of the Italian Alpine Troopers.
Not far from the Sanctuary a spring trickles from the rock wall, named “The Eyes’ Fountain” because the pilgrims used its water in order to keep their own eyes healthy.

From San Martino a very steep and difficult path leads to Nava and Pilone, while the track for La Crocetta is nowadays almost impassable because of landslides. 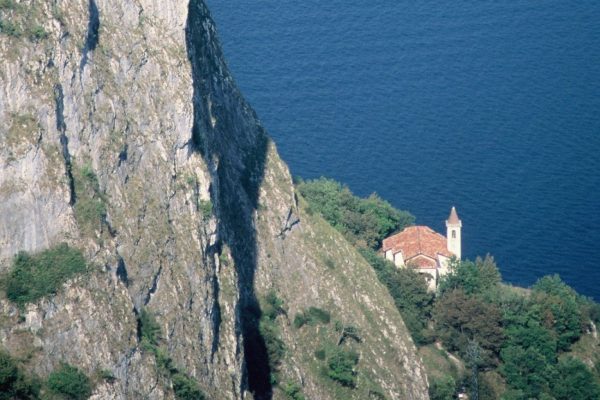