Varenna, a popular resort, is on the eastern shore of lake Como on a headland at the mouth of the Esino stream. It is a stupendous panoramic position with a view of the whole lake.
The area, which has been inhabited since prehistoric times, was the dominion of the Gauls and the the Romans. It was involved in the war beetween Como and Milan, and, in 1.169, it became a refuge for the inhabitants of the Isola Comacina when the island was burnt and destroyed by the Comaschi. Behind the village, in the locality of Vezio, there are the ruins of a medieval castle.
The donjon and part of the castle walls are still standing. The oldest part of the village has maintained its medieval layout. Among the most famous villas of the commune is Villa monastero, where summer courses in scientific subjects are held. Villa Venini has an ornithological museum, with exhibits from the lake and the valleys.
It is worth visiting the ward of Fiumelatte, named so because of the white foam of its seasonal stream, which flows in the spring from a cave to the nearby lake. 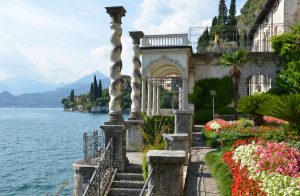 Villa Monastero
On the site of an old monastery (1.208), which was closed by Pio V in 1.567, there is a villa whcih has had many owners and who have brought about many changes to the original building, extendign and enhacinging it. It is full of works of art and surrounded by a garden which is noteworthy for its beauty and the rarity of the plants, whose growht is favoured by the mild climate of the lake.

The Church of S. Giorgio
Built in the 14th century, its front has three portals with seventeenth century featrues, a round oculus and a small cross-shaped windows, two splayed windows and the remains of pilaster strips. It has three aisles with round pillars, pointed arches. The roof is bare in the central nave but is covered in the side aisles. The spire of the bell tower reveals renovations carried out in the seventeenth century. Inside there are three panel paintings and a polypytch signed by G.B. Brentani (1.468); a fifteenth-century processional cross; an engraved baroque confessional (17th-18th centuries); and a fourteenth-century table from the Lomard school dated 1.533.

Oratorio di S. Giovanni
This building of a Romanesque origins with one small nave has been ronovated a number of times. The bell tower has a wall-belfry. Inside the church there are frescoes from the Lombard school, one of which is dated 1.533.