Lecco: A city located in the southeast end of the branch of Lake Como, it is known as the city of the Betrothed. It is, citing Alessandro Manzoni, who here set his most famous novel…
“That branch of the lake of Como, which extends towards the south, is enclosed by two unbroken chains of mountains, which, as they advance and recede, diversify its shores with numerous bays and inlets. Suddenly the lake contracts itself, and takes the course and form of a river, between a promontory on the right, and a wide open shore on the opposite side. The bridge which there joins the two banks seems to render this transformation more sensible to the eye, and marks the point where the lake ends, and the Adda again begins—soon to resume the name of the lake, where the banks receding afresh, allow the water to extend and spread itself in new gulfs and bays”.

Manzoni called Lecco: “one country that I would call one of the most beautiful in the world!”
Originally the village of pre-Roman origin, developed in the Middle Ages with the Gran Ducato di Milano (Grand Duchy of Milan), it is a logistics and significant site landscape: Totally overlooking the Lake and Adda river that just in Lecco it comes out forming adjacent smaller lakes and a beautiful course down to the Padana Plain.
Surrounded by cliffs and mountains (Grigne, Resegone) with close access to hiking, mountaineering, ski resorts (Valsassina, Val D’Esimo, Piani di Bobbio, Barzi), Lecco enjoys a climate temperature and it is an interesting tourist destination.It has an economy based on small industries (iron, textile, food) derived from craft traditions and encouraged by waterway to connect with all Padana cities until Venice, too: the navigation of the river Adda since 1600, through closed channels, whose design also contributed greatly Leonardo Da Vinci. 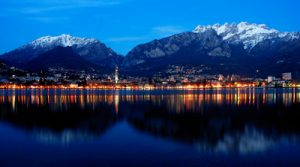 Other destination:
It is very interesting to know the excursion opportunities on both sides of the Lake (by boat, too) to Bellagio,Bellano with its Orrido, until Colico, too, where the street to Valtellina begins. But there are also significant scenic routes just around the Triangolo Lariano “Larian Triangle”: Direction Bellagio, in Oliveto L. village, you climb until theMadonna del Ghisallo and then to Monte San Primo (1685 m, for the final stretch you take about 2 hours walk) which offers a wonderful landscape, with views on three branches of the lake! For those who love trekking, from the village of Civate begins the sentiero delle vasche “path of the tanks”; if you up the creek you arrive to the Eramo di San Pietro “Hermitage of San Pietro on the Mount” and if you continue you finally arrive to Monte Cornizzolo and I Corni di Canzo “The Horns of Canzo” (terrific view).

Also advisable it is l’itinerario in bici sull’Adda “ The route by bike close to Adda River”, (you can leave from Lecco, but the best route is leaving from Brivio until Trezzo, round trip 42 km,) through an incredibly changing landscape (wide and placid ponds alternate to stacks and waterfalls), it is mostly paved but reserved for bicycles and pedestrians. On the route there are lots of steps under the old iron railway bridge of Paderno (100 meters high above the canyon), the locks and Leonardo’s boat of Imbersago, the old power plants of Cornate and Trezzo, still operating, to conclude to the Castello di Trezzo “Castle Trezzo”. In Lecco area to report also the Parco Naturale di Montevecchia e Curone, “The Natural Park of Montevecchia and Curone”. Direction to the city of Como, it is interesting the landscape along the 5 pre-alpine lakes: Garlate, Annone, Pusiano, Alserio and Montorfano, this last at the northern limit of high Brianza.