Isola Comancina Starting from the Antiquarium Museum, near which you can visit the Romanesque church of St. Mary Magdalene with it’s famous Gothic tower, you embark on the waters of the lake, crossing the so-called “Zoca de l’oli” to reach the Comacina Island. 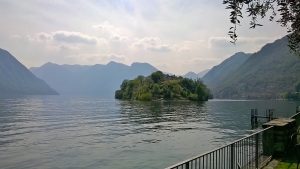 The only Island on Lake Como, was the protagonist of the local history in Roman and Medieval times, resulting in a Roman military, a political centre, and one of the most important religious centres of diocese. The magnitude of the island in history is such to make us believe that it was the mythical place from which would rise the walls of “Magistri Comacini” (ars muraria), and also the point from which would start the whole process of development of Italian medieval art. The wonderful story of Comacina seems to have stopped abruptly in 1169, which marked the ‘annus horribilis’ it’s tragic fate, devastated and razed to the ground by Como and Barbarossa, the island declined rapidly, finishing during the following centuries in a state of neglect.

Prized for its distinctive nature and splendid views, the Island Comacina regained it’s honour, since 1900, through the realization of the three houses of artists in rationalistic style, designed to make the Island a home of fine art, and thanks to a series of archaeological excavations conducted by scholars Ugo Monneret de Villard (1914) e Luigi Mario Belloni (1958-1978). To them goes the credit for having helped to define what Island Comacina is now: an archaeological site whose importance transcends local boundaries, so also to place it’s Place among the most interesting archaeological sites in northern Italy in the early middle ages.

Remains of Roman marble columns preserved beneath the church of St. John, early Christian evidence such as the unusual twin apse room with wall frescoes and mosaic fragments, and numerous remains of Romanesque churches, among which the crypt of the basilica of St. Euphemia and Stonework of the square complex of SS. Faustino and Jovita: All this constitutes the precious heritage of Comacina along with many artifacts that were recovered during archaeological campaigns that are displayed in the Antiquarium museum in Ossuccio.

Castel d’Isola
The old island, in the middle of the lake, can be reached by the ferry service. It is the site of an inn that was famous for its old owner, colled Cotoletta. The island was already inhabited in ancient times. A number of wars took place here, in the early Middle Ages. It was the last refuge for Berengario II and, in 1169, it was the centre of the fighting between the Comaschi and the Milanesi, who razed it to the ground. According to a legend some of its inhabitants migrated to Varenna and most of them went on to the new island, where the Church of Sant’Eufemia was rebuilt, with the same patron as that which was destroyed on the old island.